The current European societies are experiencing an unprecedented crisis when it comes to social inclusion in general and the social inclusion of disadvantaged groups in particular. As many newspapers show, the same COVID-19 pandemic does not produce the same effects on the student population since, for example, only considering the use of online training, students of migrant origin have more problems if only because of the lack of personal computers at home.

Many studies point the finger at the growing social exclusion of this group of persons trapped between school dropouts and menial jobs (very often in the deliveroo sector). According to OECD (https://gpseducation.oecd.org/revieweducationpolicies/#!node=41750&filter=all), "Immigrant students are less likely to enrol in early childhood education programmes, tend to have more restricted access to quality education, leave school earlier, and have lower academic achievements than their native peers. Among adults, many highly-educated workers in their own countries face a higher risk of unemployment or end up in low-wage jobs that underutilise their skills, around half of foreign-born workers are employed in jobs primarily involving routine tasks, more prone to job loss due to automation. As a result, host countries forgo the potential of productive contributions that these immigrants could bring to their communities, especially in ageing societies". The Technical report by the Joint Research Centre (JRC), (Luxembourg, 2018), highlights that "Early school leavers become generally disadvantaged socially and economically in later stages in life, so that it is important to better understand the motivations for leaving school and provide adequate policy solutions" while identifying that "at the students’ level, the socio-economic background of students, their epistemological beliefs and grade repetition, while, at the school level, the most consistent factor is the school’s mean expected early school leavers rate. The school-environment thus appears to play a key role in shaping educational expectations". As the report points out, the school environment is indeed a central theme and it also allows us to introduce the topic of the whole-school approach. From this point of view, one of the most interesting experiences is that coming from the "Schools for Health in Europe Network Foundation" (SHE) that is a network of health promoting school professionals from 33 countries in Europe and Central Asia. The network is supported by the WHO Regional Office for Europe and the European Commission (https://www.schoolsforhealth.org/). The network promotes the whole-school approach which recognizes that all aspects of the school community can impact upon students’ health and wellbeing, and that learning and health are linked. SHE recommends focus on six components in order to seek to achieve a whole-school approach, and here as for this project, we highlight: 1) "School social environment relates to the quality of the relationships among and between school community members, e.g., between students and students and school staff. The social environment is influenced by the relationships with parents and the broader community" and 2) "Community links are links between the school and the students’ families and the school and key groups/individuals in the surrounding community. Consulting and collaborating with community stakeholders will support health promoting school efforts and support the school community in their health promoting actions". Educators, youth workers and, especially, schools teachers, often complain about training and tools lackness and how often, when it comes to students of migrant origin, the emphasis is placed on teachers' skills mainly on intercultural competence, which is important but not enough. 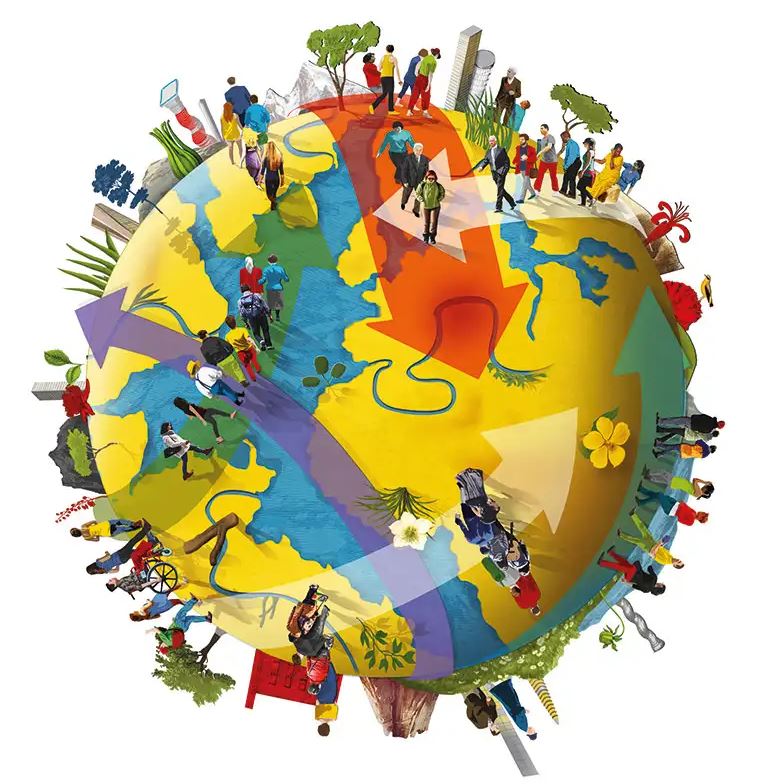 Due to this reason, the "Whole school Approach" for Youth with migrant background" (WAY) project aims at:

As far as the expected results are concerned, by the end of the project we will have achieved two types of results. As for the first type and in the long term WAY project will have contributed in having promoted the social inclusion of people coming from a migrant and low socio-economic background and having contributed in reducing the early school leaving for students of migrant origin. On the other hand, coming to the second type of expected results, i.e. tangible results, the WAY project will have supported 60 teachers, educators, youth workers in developing the competences of the whole-school approach.

Besides, WAY project will have also produced:

1. a 30-page report resulting from the needs analysis that will be conducted in each country participating in the project;
2. a 20-page scientific paper on the whole-school approach borrowed and adapted from the SHE model and published in the "Health Promotion International" journal by the Oxford
University Press;
3. a 30-page methodological guidelines.

This project is innovative because it aims at developing within the participating organizations the whole-school approach to students with migrant origin. Besides, it is also consistent with the the holistic approach toolkit that integrates methodology, working methods coming from different environments that another consortium in which the applicant is involved through the project "IHAVET" is working on.

As said few lines ago, WAY then is strongly complementary to other 2 projects that we have carried out over the past couple of years and 1 project we are carrying out right away. The first one is SHIP (School & Home Involvement Participation) Strategic Partnership in the field of school education. The aim of SHIP was to involve parents with migrant background at the school activities of their children, in order to address the issue of the early school leaving.

While the second one was Language As a Bridge “LAB” project whose aim was to contribute in reducing this data enhancing the social inclusion of the newly arrived adult refugees by improving their language knowledge.

IHAVET: “Integrated Holistic Approach to a Validated European Tool", the project is focused on one of the most impelling social problem European societies have to deal with: the social inclusion; particularly the social inclusion of disadvantaged people. Within the group of disadvantaged people either due to the high number of the people concerned either because of the dramatic social consequences of their exclusion, stands youth with migrant background.